Drawing On The Edge: Chronicles From Istanbul 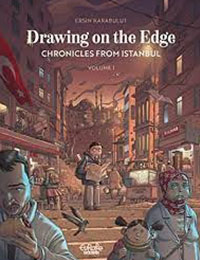 Drawing On The Edge: Chronicles From Istanbul


Alternate name:
Drawing On The Edge: Chronicles From Istanbul 2022

“Drawing on the Edge” is the story of Turkish comics author Ersin Karabulut and his journey from the underprivileged outskirts of Istanbul to the top of the satirical press and editorial world, against a backdrop of political agitation and upheaval. As his country slips from democracy toward authoritarianism, the author finds himself on the front lines, despite his father''s warnings and his own misgivings. Told through the unsparing but lighthearted observations of an artist and average citizen, this is the portrait of a country pulled apart by discord and military coups. A country where basic liberties, once thought to be a birthright, have been chipped away and erased. A country where the prime minister''s powers are growing by the day, and where a political cartoonist can end up on trial, or even behind bars. A sobering, insightful, and captivating look into what it means—and what it costs—to pursue one''s dream in the face of repression.