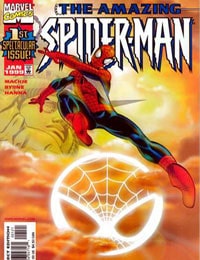 Meanwhile, at Peter Parker''s new apartment which was paid for by Mary Jane''s using her modelling earnings, Peter acknowledges the Torch''s message ablaze in the sky. He reminisces about his days as a super hero and then turns his back on this message because his number 1 priorities is now caring for his family. Daredevil, The Man Without Fear is on the streets of New York City doing what he does best; fighting crime. He fails to notice the flaming message until the criminal he''s apprehending mentions it. He concludes that Spider-Man has disappeared due to the fact that street crimes is ascending.