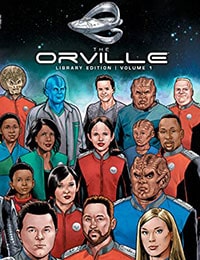 An oversized deluxe hardcover chronicling six missions not seen in the episodes of Seth MacFarlane''s beloved sci-fi TV show! Written by Executive Producer David A. Goodman and set in between the events of seasons one through three, these adventures take the starship Orville into the unknown, and sometimes, the line of fire! In “New Beginnings”, investigation of a century-old distress signal results in Ed and Gordon marooned on a war-ravaged desert planet in the custody of an unknown species. Then, in “The Word of Avis”, seemingly hapless xenoanthropologists lead the Orville into a fight for survival within Krill-controlled territory. In “Launch Day”, the question of whether a suspicious space construct is a weapon tests the Planetary Union''s peaceful convictions. While in “Heroes”, Talla considers taking matters into her own hands upon discovering an idyllic planet she once surveyed has been subjugated by a hostile alien force. In “Digressions”, Kelly must unwind an alternate timeline where her refusal to go on a second date with Ed has doomed the galaxy to destruction. And in “Artifacts”, the obsessive pursuit of a lost civilization''s legendary fleet by Ed''s old astro-archeology teacher puts the Orville in grave danger. Collects The Orville #1-#4 (New Beginnings and The Word of Avis), The Orville #1-#4 (Launch Day and Heroes), The Orville #1-#2 (Digressions), The Orville #1-#2 (Artifacts).